"Say a speaker-headed robot scoots into cover behind a Moon rock. He has calculated that the enemy formation is about to force his backup speaker-headed robots into a retreat; he knows he is about to die. Rather than flee, and allow the enemy to gain ground, he holds his position, perhaps laying down cover fire, so that his death will keep the TV-headed formation at bay. Someone blows up his Moon rock. He dies.

That TV-headed someone rockets backward, due to low gravity and a lack of convenient Moon rocks to brace against. He leaves a hole in his formation, and takes up space in a formation half a mile to two miles behind him, screwing up their intricate calculations as well as his own.

Aforementioned backup speaker-headed robots perceive an opening. They scoot forward, calculate how to best take advantage of the newly holey TV-headed formation, and fire, rocketing backward, leaving holes in their own formation and cluttering those of their comrades. Simultaneously, the arrival of a TV-headed someone on the battle lines a mile or two in front of them disrupts the formation but adds firepower to the TV-heads. Even odds whether the speakers or the TVs advance, but one of them certainly calculates a perfect place to shoot at, to take advantage of the disruption. Whoever shoots, rockets backward.

As tactically perfect beings go, robots sure get stuck in infinite-repetition loops a lot."[1]

"Nemo's Factory proudly presents the very first release - in the deluxe orange colorway! Each figure comes with three heads, a Speaker, Monitor, and Camera, and are 18 parts and with over 30 paint applications in three delicious colors. Over the orange PVC is a lighter yellow-orange color, a darker blood orange, and a deep blue for the accents. I don't plan to produce such a deluxe figure again any time soon, but I wanted something special for this first release! Oh and they are fully Glyos-compatible, naturally!" Released June 11th, 2015. $20.00 each."[2] 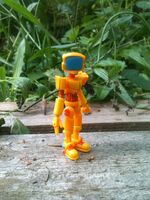 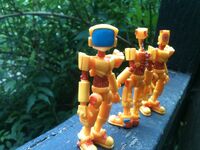 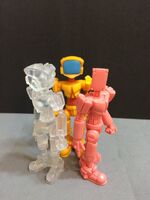 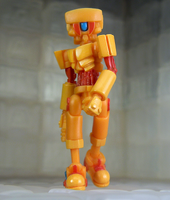 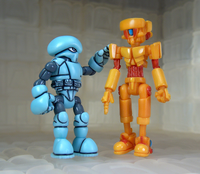 Retrieved from "https://glyos.fandom.com/wiki/A/V_Robot_Deluxe_Orange?oldid=24134"
Community content is available under CC-BY-SA unless otherwise noted.