Designed to quickly adapt to its surroundings, the Flatwalker operates mainly as a surveillance device for Glyaxia Command, relaying all gathered information instantly back to Block Base."[1]

Impenetrable to nearly all invaders who dare plunder her secrets, the Sporian planet Alcray now faces the growing dominion of Glyaxia Command... After detecting unusually high levels of subterranean activity beneath the living surface of Alcray from their orbiting Block Base, Glyaxia Command mobilizes a specialized team of Crayhunters to abduct a recently sighted set of rare twin Crayboth...

The machines started to hum. "Understood, Commander. Increasing Hyper Phase Bombardment levels." answered the the little Protoclone. Zerennic paused before speaking, "Perhaps we have given them too much power already?" Akurriax wouldn't hear of it, "We must give to receive..."

"Wait..." Zerennic started, before pausing again, "I sense something..." Something was there. "...Do you feel that?" The lights went out.

"Let's move! Prepare for Warp!" quickly ordered Akurriax. The little yellow Protoclone spoke up again, "Commander! What about the specimens? We have already activated the Hyper Phase Bombardment Program..."

"You stay and monitor their progress, the rest of us need to go at once!" Akurriax angrily responded. Block Base was more important, it could not fall. Not here, not now. The troops warped out in waves. Lower level grunts taking the first pass at jumping into the middle of a fight followed by their Commanders safely bringing up the rear. In an instant, the Glyaxia Standard Protoclone was all alone with the two Crayboth. The machines started to hum louder and grow red... overload.. it was going to overload! The room flashed white as waves of energy poured off the two Crayboth. The Crayboth had practically turned Nuldireus and Neo Phase as the power surged beyond the safety limits. The Protoclone screaming was the last Glyaxian noise to be heard in that room as everything went solid white.

Color slowly flowed back into the large Experiment Room. Gryganull and Grellanym found themselves a tad stunned, but freed none-the-less from the Glyaxia Command devices. Grellanym attempted to speak, "What happened... Where are we, Gryganull?" The room still hummed red. "I feel a strange energy flowing through me..." he added.

"This is a Glyaxia Block Base, Grellanym" Gryganull answered. Recent events were slowly coming back to him. "I remember now... they took us... as we were headed back from the gathering." There was... something else. "I can feel the energy as well... so powerful..."

Grellanym was getting worried, "We have to get back to Alcray, no matter what it takes!" No time to wait while Glyaxia Command was busy, out the door and into the main hallway they went.

Successfully defeating the Heavy Armored Wing and Glyan troopers awaiting them in the hallway, the Crayboth pair Warp out. Grellanym spoke first in the darkness surrounding them, "This place seems to change beneath our very feet! As if the Block Base were alive itself!"

"Whatever Glyaxia Command did to us has increased our power to extraordinary levels!" added Gryganull. "Now we can stop their machines of war with far greater ease than ever before!"

Akurriax's presence could be felt all around them. "Machines of War?!!!" the voice echoed, "You know nothing of which you speak!"

Akurriax's presence surrounded them again. "Truly a noble species..." Akurriax offered, "Though I do admire the tenacity you both have shown, your attempt to gain freedom from this place is in vain." His voice lowered, a touch of anger to it. "Block Base itself is your enemy now..."

Crayboth Gryganull and Grellanym warp out of the hallway to another area. However, the Crayboths are still trapped within the Glyaxia Block Base. " This place seems to have no end!" grumbled Grellanym, "Every move we make feels like it's being manipulated by forces beyond our sight."

"We have no choice but to battle through whatever else Glyaxia unleashes upon us." replied Gryganull. "We cannot give up!"

"You have been upgraded with Hyper Mode. Report back after your test flight. Remember to mind the drift, Hub 21..." Glyaxia Commander Akurriax orders.

"Marty and I discussed a story arc that involved Glyaxia Command snatching some Kabuto Mushi specimens, with the intention of cloning them aboard Block Base."[2]

"ZEM has been abducted!"

Glyaxia Command takes the enigmatic mechanoid through a rift into the mysterious Glyos System. Sensing trouble, Maxx Zero goes undercover, infiltrating Glyaxia Command's Block Base. Once inside, Maxx stumbles upon a nefarious plan - Glyaxia Command has stolen the designs for the Robo Force and intends to create a mechanical army!

To rescue ZEM, Maxx engages in combat with three Elite Glyaxia Clones of Sentinel. Unexpectedly, dynagenesis occurs, transforming the doppelgangers into a brand new ally - Vanguard the Warrior! Possessing three times the strength and power of a Protector Class Robot and wielding a super-charged forcefield blaster, Vanguard the Warrior turns the tables on Glyaxia Command![3] 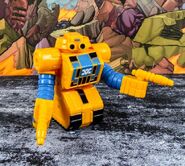 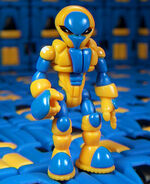