Andor was first featured in the original Ideal toy line's book The Treasure of Andor featuring Dr. Richard Fury and SOTA. The city currently functions as a Space Station in an unknown location in deep space.

Journey to the lost city of ANDOR and learn the secret history of Planet Zero! A mysterious character with a score to settle is unleashed! Created on a long-lost outpost of Planet Zero, the Zetonian returns to confront Maxx Zero and the Robo Force!

The City of Andor

Planet Zero launched the city of Andor into space, an attack by an insane tyrant causing fail-safes to be activated. The city had been designed with a transformative aspect, allowing it to become a giant spacecraft. But there had been an error - the trained custodians of Andor had been destroyed, leaving the city-ship floating through space without active life.

It had been roughly sixty years and millions of miles traveled when the backup signal reached Andor activating core Omega One, the power source of the entire city. Cutting edge machines began their processes, building a new advanced machine beyond any Zeroid previously in existence... the Zetonian.

Named after a rare metal found on planet Zero, this new race of machines would develop without the influence of previous generations. It was this innocence which, hundreds of years later, allowed Zemo and Hunter to gain the confidence of the city commander in Andor, ENFORCER, and steal a precious Proto Zetonian.

Renamed Orthus and fully indoctrinated into the principles of the Great Hunt, this warrior Zetonian enacts the will of Zemo![1] 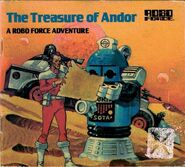 The Treasure of Andor book cover

The Gates of Andor