Anomalies are NiStuff's first foray into the action figure market with static-style mini figures starting in 2011. Each figure is made from Production PVC and typically sold in a full set of 6 ($5 a set) or 2 (Ancient Astronaut & Adamen) included with Accessory Set A in the Outlander line.

"The inhabitants pages will be updated to include race information of the 6 beings included in the Anomaly 6 pack.

There will also be some familiar races showing up in there soon including the Glorg, the Clack, the Taizu, the Fed, the Shellios, the Yough, the Zinx, Abominations, Subjects, the Slir, the Parodien, etc. So keep an eye out for them."[1]

The Ancient Astronauts are a rumored race of space walkers. There are hundreds of rumors out there, and these are some of them:

There are no known Ancient Astronaut civilizations on any of the inhabited planets. Their heights vary from rumor to rumor, some people claim 6-7 feet, others claim 70+ feet.[2]

The Ancient Astronaut
Add a photo to this gallery

The SEG Construct are a living enigma. They’re not quite organic, but not quite robotic either. Their appearances are even more baffling. Almost overnight these curious behemoths appeared all over towns, cities and villages throughout the universe. Immediately they were questioned, where had they came from? Why are they here? What are they? In some cases no questions were asked and they were attacked on sight. The bits of the attacked SEG Construct scurried off in different directions joining up with other SEG Constructs. They don’t react to small talk or regular conversation, the only thing that seems to get through to them are direct commands. After noticing their attention to commands the majority of SEG Constructs that appeared in populated areas were adopted as guardians or sentries. Free guards are never a bad thing, especially if the guard is a massive nano-bot-esque giant. There is always a possibility that one day they will be awoken and turn on their new “masters” but they may just be a benevolent subservient race.

The SEG Construct can vary in size depending on how many nano Seg’s are currently lumped together. On average they’re between 8-12 feet tall.[3]

The SEG Construct
Add a photo to this gallery

The Strugg are one of the few races created completely from the remains of another. The spider robotic race, the Mediboids are responsible for the retrieval of the limbs and other organic body parts left behind after battles. They are plucked fresh from the battlefields still steaming and bloody. The Mediboids then cobble the abandoned organic bits with ghost limb technology created by the Mediboids themselves. The Strugg are easily programmed for an infinite number of purposes. They are void of personalities, emotions and free thought. These factors contribute to the Strugg being one of the greatest troop building forces in the universe. The Mediboids are constantly laying in wait for injured or fallen warriors to continue the growth of their Strugg inventory. They’ve even been known to salvage usable bits from fallen Strugg literally recycling the recycled soldiers.

Strugg can be created from any organic remains so they have no definitive height or appearance. They average between 4-9 feet tall.[4]

Mediboids
Add a photo to this gallery

The Adamen are the most humane of all the 481 races. They are literally the most defenseless bipedal organics the universe has to offer. The Adamen come from a long line of mundane lifestyles. Their ways of life center around laws, elections, business, and industry. The Adamen do the jobs no one wants to do. The paper work, the data input, the filing–all done by Adamen. Their average height is 5 feet tall. They’ve kept their heights constant through monitoring their consumption. Taller or shorter Adamen are looked down upon as being impure, slobs. They find their small stature endearing and it’s one of the only things they can consider an everlasting trait of their race, seeing as the years before they made the leap into the heavens have been erased from their history texts. (When you don’t have a history to go on, make your own!) The Adamen outfit is another staple of their race, it’s both stylish and efficient.

The goggles the Adamen wear have multiple uses:

The Adamen
Add a photo to this gallery

The Laion are a race divided. Half the species believes in peace and helping anything or anyone, whereas the other half are a vicious, feral bunch of hunters. It’s the classic divide, but in this case they are complete polar opposites. At the core of it, the Laions are a race of extremely tall (10-15 ft tall) felines with extremely large hands and trunk-like feet. Distinguishing features include a repressed mane, deep set eyes, forehead jewel and jewel covered feet. These jewels are tradition among both factions, they are forcibly applied with extreme heat when the Laions are very young.

The Benevolent faction of the Laions believe they didn’t build themselves up to this high point of societal and technological advancement, but they believe a higher power bestowed this knowledge upon them. Guiding them through difficult times and picking them up if they were to stumble. This belief keeps them out of most conflicts in the universe, backing out of potentially hazardous confrontation before they are put into danger. Their monk like lifestyle has served them well for millennia.

The Feral faction of the Laions believe that there is nothing more to life than the pride or pack. The thought that an advanced being bestowed some form of intelligence upon their race is absurd to the Feral faction. They believe everything they’ve achieved was due of hard work and clawing their way to the top. They travel on all fours as opposed to walking long distances on their hind legs. The Feral Laions also let their manes grow out and have sharpened their feet jewels. They wear armor that has been passed down from previous generations. The ancestral armor is all battered and damaged.[6]

The Laion
Add a photo to this gallery

The Slir are an organic plant-like race of beings that appear to be quite monstrous and bestial but are actually quite intelligent. They’ve been known to grow to ridiculous sizes but their average size is between 5-9 feet tall. There are a few variations of the Slir race:

The Demi Slir which are the first stage of the Slir’s life. They’re quite a bit smaller than the average slir and their vinelets are still in the pupa stage.

The Slir which are the average slir. They are fully grown and their tentacles are capable of invasive linkage mental control.

The Slir Superior which are the leaders of the Slir race. Their vines enter a metamorphic state where they clump up and become a beefier stronger being.

One of the most powerful aspects of the Slir are that their vines have the ability to take control of organic minds. With one touch they can bend beings to their will, with a tighter grasp they can be in complete control of the host. This mind control technique usually comes in the form of the Slir wrapping themselves around the host’s head. It’s easy to spot someone that is currently under the control of a Slir due to the large viney head that doesn’t quite match the host’s body size.

The majority of Slir call the planet T’Zutton their home. T’Zutton is also the home world of the Taizu. The planet is extremely large as far as planets go. It’s radius is several hundred thousand miles. It has 5 large moons and is 70% covered by Taizu cities, with the remaining 30% covered in harsh jungles.[7]

On T’Zutton
Add a photo to this gallery 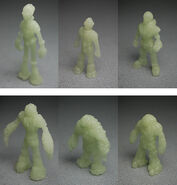 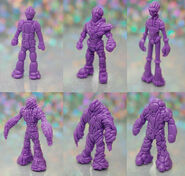 Pixel Art
Add a photo to this gallery

Retrieved from "https://glyos.fandom.com/wiki/Anomalies?oldid=17186"
Community content is available under CC-BY-SA unless otherwise noted.