A Villser Virus mutation of the original Argen. Argenesis actively avoids Buildman components when it makes an appearance and has come into conflict with its original source program.

"It's curious that Argenesis only seems to manifest through accessory upgrade configurations at this stage, almost as if the entity is specifically avoiding any original Buildman components..."

"Does the true essence of Argen exist within the body, or the core program of his being? Maybe both?

The Phase Sentinels serve as extensions of the Argenesis entity, though not simply as mindless drones, but as gradually individuating sentient vessels, created to share separately acquired knowledge and experiences directly with Argenesis itself."

"Yes, the Sentinels could potentially evolve beyond Argenesis and rebel, but Argenesis would welcome this.

If Argenesis is still comparatively the most evolved entity within its loop, it has the power to transfer into a Sentinel and take control. However, it may be possible for a Sentinel to evolve to a point of being able to close the pathways to Argenesis, but since Argenesis is always receiving the collective data of the Sentinels, the chances of Argenesis being overpowered are nearly impossible. 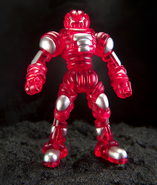 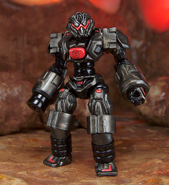