Designed by Matt Doughty of Onell Design, sculpted by Jason Frailey and prototyped by Marty Hansen, the Armorvor quickly became one of the most popular figures from the mind-blowing Glyos system figure line.

The Armorvor was first prototyped in 2011, before becoming a full production figure in mid 2012. Since then, there has been an Armorvor found in the Glyos release on nearly each occasion. -- The Armorvor Archive[1]

"The idea behind the Armorvor (or Neo Beast as we used to call it), began many years ago, but it only started to become a reality after combining forces with Marty "The GodBeast" Hansen and Jason Frailey.

Marty and I had discussed a Battle Beast inspired figure all the way back in our first communications together, as we had both wished that the classic line would make some kind of return, whether as repros or as a completely new series (which arrives this September from Takara Tomy!). I had added some small joints to a few of the vintage figures, imagining that a new line might resemble something of that nature and shared the images with Marty, who seemed to get a kick out of them. Even though it was just a passing conversation, the seeds were sown for what would eventually become the Armorvor.

Fast forward to the spring of last year, when the subject of making a beast inspired figure popped up again. I was preparing for our next figure, which was looking like the Delphi or Noboto, when a change of plans occurred. Marty had mentioned that he knew an extremely talented sculptor named Jason Frailey, and that he thought Jason would be the perfect artist to build the "Neo Beast" that we had been discussing for so many years. I was a little hesitant at first, because we had never produced another sculptor's work under our own banner in PVC before. Would Jason understand the multiple properties each part would need to have? Would the figure look too out of place when completed? Even with some reservations, we moved forward.

Once I had my first conversation with Jason, I knew we would be more than alright. Jason Frailey, as it turns out, is not only a world class sculptor, but he is also an gifted designer. I think this is a little known fact even amongst his peers at his job with NECA. After supplying Jason with the initial conceptual drawings, he started in on roughing out the core proportions. I was thinking about making the overall figure a little leaner, so that it would fit in with our standard range of figures, but Jason wanted to give the little guy a bit more heft, evoking a deeper BB connection. Initially I was concerned that we were getting too close to the core BB property, but with a few tweaks and many late night talks, the right balance came into focus.

Jason stayed very true to the first drawing with the early sculpt, but then started to add some of his own twists and details into the design, which made the figure really come to life. The entire shoulder structure was improved, as was just about every single piece of the Armorvor thanks to the intuitive process that Jason employed. He even came up with and designed the backpack/phaser/drone head without missing a beat. I realized fairly early on to trust in his abilities as a designer, as well as a sculptor. The Armorvor became something more than it would have if it were only developed in our shop. It became a true collaboration between all of us. Marty would weigh in on the creative direction, using his BB expertise to assist in the visual cues that we all eventually settled on. Once the final sculpt was a lock, Marty began the casting process to bring the early prototypes out to all of you guys, with him and Jason continuing to design new heads all the while (I squeaked a few out with Marty as well). Nate from the Dork Dimension then brought his illustrative arsenal to the party and made some incredible works of packaging art, rounding out the urethane release in proper form.

The first phase of the Armrovor's life had begun.

The basic storyline for the Armorvor has been in place for some time, so having Jason sculpt it also played right into the "alternate tech" idea, representing a slightly different aesthetic for this particular race of characters. I really can't say enough about Jason's contributions to the final piece, it's as much his design as it is mine, maybe even more so.

Our goal was to get this little bugger into full production, and thanks to our man Paul over at our factory, we have been able to finally do it, after an entire year of development!

Thank you Jason, Marty, Nate and Paul for working so hard with us to bring this new creation to life. Hopefully, we can do it again real soon."[2]

Hey, folks, the internet has been buzzing about a recent collaboration I have been doing with Matt Doughty and Marty "GodBeast" Hansen. It's been called project X, it's been called "feral non-human armored combatant" and variations thereof, but it is now officially been dubbed -- The Armorvor![3] 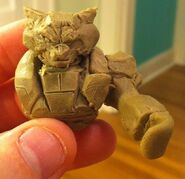 "It was really fun teaming up with Ralph again for this odd little tale. We wanted to explore a little more of Volkria, back before things got... "complicated". Ralph brought everything together with his rhythmic pacing, and was very patient in dealing with my nitpicking ways."[4]

When they first came to Volkria, the Delphi were fascinated by the planet's native species. Deep in the woods, they encountered a trio of wolf-like beings displaying signs of evolved thinking. Each was a member of a different species: the smart, quick-witted Halosars; the Verexxa, capable of hypnotizing other animals by singing; and the powerful warrior Armorvors, who defended the other two. When the three were unexpectedly ambushed by a predator, the Delphi made the decision to intervene and save the wolf creatures by killing their attacker. The Delphi adopted the three wolf species as their own children - referring to them as "Volkria," the Delphi word for children - and shared Black Core technology with them to speed their evolution. But once a civilization had been built on the planet, the Armorvors used the Black Core tech to rebel against the Delphi, killing one of their number. While the Delphi were willing to forgive the Armorvors for this, the Delphis' masters were not and ordered the Delphi to wage war against their adopted children. The Armorvors were outmatched and their numbers eventually reduced to a small group led by the Halosar-Armorvor crossbreed Venjorun; instead of killing these last members of the species, however, the Delphi secretly defied their masters and banished the Armorvors into the Zorennor Rift. The record ends with one final warning: "Beware the Armorvor. For when Zorennor bleeds again, so too shall all of Glyos..."

With the aid of the Armorvors, the Granthans finally rise up to reclaim their world after so many oppressed generations."[5]

Now with a small measure of hope restored and a reforged resolve, a battle-worn Glyaxia Command slowly rises to settle the score."[6]

Retrieved from "https://glyos.fandom.com/wiki/Armorvor_(Species)?oldid=30937"
Community content is available under CC-BY-SA unless otherwise noted.