It’s been two weeks since the blockade of Artemisium started. Admiral Babur’s fleet has been constantly gathering reinforcements of regular warships to complement his fleet of top-of-the-line Class I and Class II vessels. Fresh troops, specially trained for desert fighting have also been added to Babur’s already considerable force. Finally judging the advantage to be sufficiently overwhelming, he launches an all-out night attack on the pirates. Just outside the planet’s atmosphere, The Arrow is the first to go, hunted down by Babur’s fleet and dispatched in one spectacular explosion.

The attackers then move on to the enemy entrenchments on Artemisium itself. Every tunnel, every bunker is fiercely contested and the casualties mount on both sides. After a whole night of fighting, a fresh reserve of Desert Dogs is unleashed on the exhausted defenders, and the pirate stronghold finally falls.

Remaining pockets of resistance dissolve one by one, but even then, they are selling their hides dearly. Later eyewitness reports describe heavy, desperate struggle, and rivers of blood. Certainly any captured pirates were swiftly put to the sword by Babur’s troops. Though he had dispatched his fair share of enemies over the years, the admiral was not inclined towards excessive cruelty. But after what had happened with The Arrow, an example had to be made. He went about it quickly, and then turned towards cataloging all the recovered loot.[1]

Each Tank is 4-1/2″ tall, has 5 separate parts and is made of super durable soft vinyl. Includes paint applications on threads and gun plus a faction identifier tampo prints on side and bunker. Released July 10th, 2016. $30.00 each.[2] 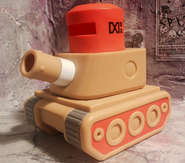 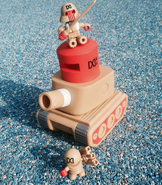 Retrieved from "https://glyos.fandom.com/wiki/Artemisium_Tank?oldid=20832"
Community content is available under CC-BY-SA unless otherwise noted.