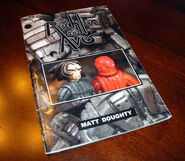 "Rechlen and Aves were portrayed as Space Trappers who would capture exotic alien creatures for display at the fancy pants (and super dangerous) Galactic Exhibition Facility on Capital Planet Metran. They would constantly need to modify their Rigs to deal with the tasks at hand."[11]

"These detail the duo's attempt at capturing some Crayboth on the Sporian Planet called Alcray, as they are assisted by some OS-Buildman Gendrones and their partner in crime, the Gliporian."[12]

"Rechlen and Aves working on one of their most reliable old Rig configurations, the "Nava" (which Rechlen named after a female Space Freight Driver that he once knew). They keep all the used parts from past missions in an area located in the front of their ship, the Edgeliner Delphi."[13]

"Another main character in Rechlen and Aves is the Gliporian, or "Glip", as Rechlen calls it. It functions as a kind of shape shifting, living holding cell, capable of containing the creatures that the team tries to trap. The Glip is a big part of the Delphi crew, even if it doesn't have much to say. Oh, and it does not get along with the OS Buildman Gendrones."[14]

"This version of Exellis is the result of another mash up of figures. I used the Standard Version Exellis chest and pelvis and the arms, legs and head of Reverse Exellis to get this look. I wanted to try to bring the flavor of Aves in his grey Capture Suit into the figure. When the whole main body and upper arms and upper legs are the same it gives a different effect that I kind of like."[15]

It looks like Aves Exellis is about to get his clock cleaned by a much cooler looking and flat out nastier opponent!"[16] 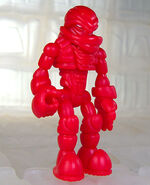