Introduced as a way to expand design possibilities to existing Glyos accessories, Unlimited Builds use existing parts and present them in a brand new way.

"By combining the parts from two Skeleden Armor Sets, you can start to build the "Battlecurse" form of this oddball hybrid.

The fits on the leg armor parts are also compatible with the hands of a regular Traveler. Flipping the chest armor upside down and seating it sideways around the head also pushes the heavy bio armored look.

Back in the 90's I was nuts about a figure called Battleclad Spawn from McFarlane Toys. The Skeleden Armor design owes that old character a debt of gratitude, as it was a definite influence on the stacked armor style you see in the pic shown above.

It turns out sculpting ace Eric Treadaway of the 4H was the man behind Battleclad Spawn, which is pretty neat, as Eric and I would eventually go on to become good friends as we worked on the 4H's OSM and Power Lords projects together."[1]

"Increasing the amount of armor sets to four allows for a bulked up version of the Battlecurse form.

To build this meatball, the upper arms need to be flipped so that the elbow and shoulder positions are switched, which in turn opens up the clearances. Getting the thigh parts on can be a little tricky, but once you slide them into place there's still a decent amount of rotation possible.

I've been carrying this pile of bones around for a bit and so far everything has stayed together, with only the left knee connection occasionally popping off after prolonged rides in my jacket pocket.

Another bizarre configuration involves turning two torso armors on their sides, each one covering half of the Traveler chest for a split faced effect. You can also use the torso armor as a pelvis guard to push the heavy armored look even further.

I imagine Skeleden reluctantly calling upon the wicked energy of his bio-bonded axe, Soultaker, to grant him greater powers as they face the challenges of dimensions and dungeons unknown."[2] 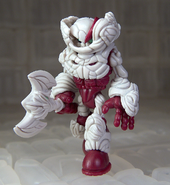 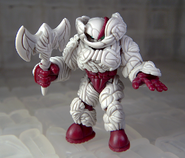 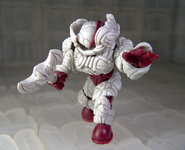 Retrieved from "https://glyos.fandom.com/wiki/Battlecurse_Skeleden_Armor?oldid=19676"
Community content is available under CC-BY-SA unless otherwise noted.