"Robotech, GI Joe and Transformers were just a few of the massive influences that got so deep into our creative DNA. I was personally insane over the Zentraedi from Robotech (Macross) and all the additional armor designs that popped up throughout the three parts of the Robotech saga.

Some of the most iconic color schemes of those days came from Transformers, particularly the Decepticons. The Insecticons, Seekers, Predacons and basically every G1 bad guy colorway were glorious and hugely influential. The Autobots were also just as good, giving a super hero vibe to giant robots with their Marvelesque color choices."[2] 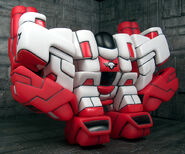 Retrieved from "https://glyos.fandom.com/wiki/Big_Rig?oldid=20146"
Community content is available under CC-BY-SA unless otherwise noted.