"Distress call has been sent out from the Nuklerios crew stating that the Bio-Mass Monster has gained access to an undocumented military weapon. Survivor has confirmed that the creature has "consumed" and "absorbed" this technology giving the monstrosity a strange spectral glow and allowing the creature to send forth highly focused, devastating beams of nuclear energy.

Update: Nuklerios Vessel has been located. The entire crew has been slain. The Bio-Mass Monster was not found aboard. Emergency alert has been transmitted. Investigation ongoing." 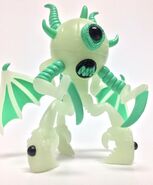 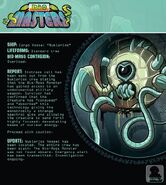 Artwork
Add a photo to this gallery
Retrieved from "https://glyos.fandom.com/wiki/Bio-Mass_Monster_Nuklerios?oldid=29358"
Community content is available under CC-BY-SA unless otherwise noted.