"After the first encounter with the alien absorbing Villser, Pheyden summoned another version of himself that was better suited for combat with these deep space beasts. Enter Bio Pheyden, one of the strongest alternate Pheydens in any known dimension. Wearing a special hardened Flexion Suit, Bio Pheyden actually comes from a world infested with the Villser species. The Shadow Villser is perhaps the most efficient and dangerous form that these beasts can evolve into, capable of hopping through dimension rifts to spread their deadly menace. Bio Pheyden had been tracking a group of them for some time and was more than ready to strike when the first Pheyden contacted him for assistance. However, things took an unexpected turn when Bio Pheyden got into some trouble..."[1]

"After nearly being destroyed by a renegade Villser, Bio Pheyden begins to lose control of his form, strangely mutating into hybrid creature. Somehow the wounds inflicted by the Villser infect Bio Pheyden's system, causing a unique transformation into an advanced, all new lifeform. This new specimen's first act is to create two smaller clones to do it's bidding . Is there any part of Bio Pheyden's mind left in this beast? Is this the true power of the Villser, to corrupt all living things? A Pheyden from a deadly dimension may hold the answers..."[2] 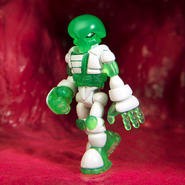 Biophase Pheyden
Add a photo to this gallery

Retrieved from "https://glyos.fandom.com/wiki/Bio_Pheyden?oldid=25880"
Community content is available under CC-BY-SA unless otherwise noted.