"Want! Take! Have! Only laws Brutok live by!"

Brutok is a physically powerful Monkaarian. With his lumbering size and broken speech many take him for a simple being. That mistake is deadly. He is the most cunning and brutal strategist to ever stride into battle.

Brutok loyally served the Mistress of Shadow. True love for her is why he continues to follow Umbreus. Brutok hopes to gain the knowledge to set his Mistress free and prove his love. Until then, he is content to wage war upon The Gearo. He relishes his battles with Palidar, the only being he feels is his equal on the battlefield.

"Suddenly and with a great crack of silver lightning all was once more calm. Brutok stood, fists clenched and teeth gnashing. The two Veridiohm had once again assumed the forms of Monkaarian Gohlem. Both Veridiohm stood staring at Brutok in awe. “The trial is concluded. He will serve the purpose we require,” the first Veridiohm said. “The song of his soul is stronger and more clear than any being we have ever encountered. We understand.”

“Indeed,” concurred the second. “He will surely be powerful enough to defend the Futurestream against that which they have set free. Verdict. Brutok as Novum Veridiohm you will remain.”

“Set free? What is going on here? You have heard the song of his soul. We are no threat to the Futurestream. We can help you defend it. We both command great armies. Let us go back to gather them so that we may aid you. Send us home. Send us back to Monkaa!” demanded Empyreus.

“They intend that, young Lord,” Brutok said with conviction. “As they heard the song of my soul, they shared theirs with me. The battle between you and Umbreus tore rift space apart. A great ancient evil has been set free from his prison far forward in the Futurestream. A timeless evil, greater than even Umbreus.”

“It is the sentence of the one named Brutok to travel with us to the end of the Futurestream,” the first Veridiohm stated.

“You, Empyreus, Lord of the Gearion will be sent back to Monkaa,” intoned the second. “Your sentence is far more crucial. You must not fail. Brutok, if you will.”

“What sentence? You’ve not tried me! What must I do to save the Futurestream?” Empyreus begged for answers. None were given. Suddenly a rift of green energy opened up behind Empyreus. It began to pull him in. He was still too weak to fully resist but tried with all of his might. “Brutok, NO!” he cried. “I can’t leave you here. We know nothing of what these beings speak of. We must return to Monkaa. Together.”

“We both go to Monkaa, young Lord,” said Mighty Brutok. “Learn well from your encounters. Your journey will be hard. You will be tested beyond your limits. Stay strong. Stay true.”

Brutok placed his hand upon the Gearo symbol emblazoned upon Empyreus’ armor. He clenched his fist around it, crushing the shiny silver plate, ripping it from the young warriors chest. He then leaned in close and whispered, “Gather the Tribes… Magelok is free…” with those final words he gave Empyreus a gentle shove through the rift."[1] 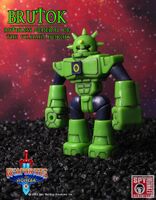 Based on the Golden Age storyline.[3] 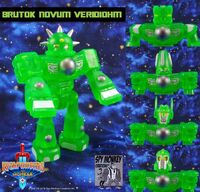 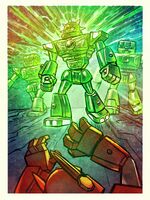 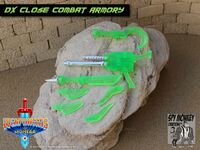 Retrieved from "https://glyos.fandom.com/wiki/Brutok?oldid=17568"
Community content is available under CC-BY-SA unless otherwise noted.