Production PVC Callgrim - Dominus. One Callgrim head and one Order head are included with each Callgrim/Order figure. Parts are completely interchangeable with all Glyos System Series figures. One figure is included per package. Roughly 3.5" tall. 27 total parts. Released June 30th, 2010. $10 each.[1] 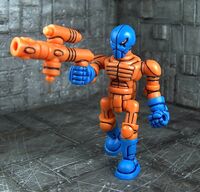 Retrieved from "https://glyos.fandom.com/wiki/Callgrim_Dominus?oldid=13540"
Community content is available under CC-BY-SA unless otherwise noted.