The best part is- each 4 inch figure is fully interchangeable! Pop off an arm or leg and swap them out for infinite color combinations. Works with all Glyos® system figures." 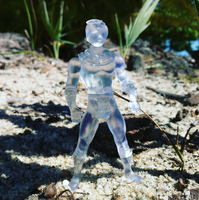 Retrieved from "https://glyos.fandom.com/wiki/Clear_Knight?oldid=12702"
Community content is available under CC-BY-SA unless otherwise noted.