"This version of the Glyan has a slightly different construction than the upcoming releases of the figure, as we have made a few changes to the steel tool (inner chest pin positions have been modified). This will be the only time this variation will ever be made available. Classic first run tweaks, once again due to my obsessive behavior!"[2]

"After the success of Project Black Skull, Glyaxia Command placed a razor sharp focus on identifying more "advanced" recruits within their various OTR Programs through something called the Marivok Directive."[3] 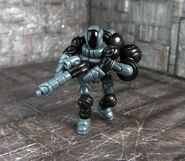