The original abductee and emissary for the Rift Killers, Coprolite was taken from earth around the early 1900s and used as a guinea pig for their experiments. Being programmed with the Rift Killer's language (along with all other known ways to communicate), he was the point person to greet Teal after he too was abducted by the RKs. While not the warmest semi-human, Coprolite did his best to educate Teal, who in turn banished the emissary once Teal rose to power. His blue on blue eyes are a reminder that while he still appears human, the extent of his modifications are not known.

His signature move is the helmet-bash, wearing the RK headpiece on his fist and pummeling foes. 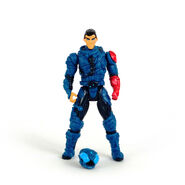 Add a photo to this gallery
Retrieved from "https://glyos.fandom.com/wiki/Coprolite_Killer?oldid=25731"
Community content is available under CC-BY-SA unless otherwise noted.