The Crystal Gohlem are carved from the ancient quartz mines of Monkaa. Crystal Gohlem usually find the path of the seer, although many have been drawn to learn from Palidar and bolster the ranks of the Gearo Forces. 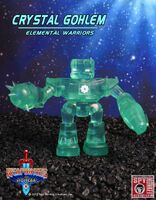 Retrieved from "https://glyos.fandom.com/wiki/Crystal_Gohlem?oldid=17569"
Community content is available under CC-BY-SA unless otherwise noted.