Planet Earth was once inhabited, eons ago, by beings of an Ancient Race of Fabled Creatures, stemming from a time before all other Earthly life forms, from dinosaur to man, evolved into existence. These elusive entities are still whispered about today, among those in the know. They are referred to as the “Elder Gods”. Cthulhu was one of those!

As is the case with many legendary life forms, traces of their existence remain. Some survive as entire beings, merely hibernating, beneath the earth in secret places, waiting to wake up one day. Others are alive and well, although existing only in the form of free flowing DNA.

Many centuries ago, the Men of Neptune, while exploring Earth’s great Oceans, journeyed to a terrible place, deep in the murkiest depths of The Deep Blue Sea, a place so deep that Deep Blue turns to Inky Blackness there, and only a thin layer of remaining rock separates the combined weight of Seven Seas from the World of Hollow Earth below. If that fragile barrier should ever fracture, the full force of all Earth’s water will meet the core of molten lava, and, like a giant pressure cooker, the entire planet will EXPLODE! And so, it came to be that, in this epicenter of impending annihilation, DNA remnants of the Elder Gods remained, and certain members of the Neptune landing party assimilated the DNA of Cthulhu, through a process known as inhalation. And they began to change…… Behold the terrible transformation![1]

Eons beyond all reach of memory, when time was immemorial, and the newborn Universe was young, the entire Cosmos was the realm of Ancient Deities. These mighty entities, propelled by the unbridled power of their mind-boggling minds, could travel easily, and instantaneously, beyond the stars and planets of the Milky Way, to explore far distant Stars and Galaxies. Sometimes known, today, as The Elder Gods, their legendary histories, as well as their hibernating bodies, sleep, beneath the Sands of Eternity. There, they wait patiently for the Day of Reckoning, when this ancient race will rise again to once more rule the vast expanse of Outer Space. Here on this humble planet, the third one form the modest star we call our Sun, we speak in whispers of these mysterious beings, whose vastly varied physiognomy is rumored to be both breathtakingly beautiful and hideously ugly. No words, among the multitude of languages that came and went, throughout a million centuries, were ever capable of describing what these bizarre beings looked like. Nor, is any voice of man or beast capable of pronouncing their complex names. It has been said that to meet one of these fabled creatures is an experience that falls somewhere between Nirvana and a Nightmare. And the viewer, be he Human or Alien, may never again seem the same. The Incredible Old Ones; long may they reign!

CTHULHU NAUTILUS is the direct descendant of the Elder Gods that once inhabited this planet, eons before the time of man began. He possesses his ancient ancestor’s ability to project both his mind and body through the Seven Dimensions of Time and Space to explore the farthest reaches of our Galaxy and the vast Unknown Universe that lies beyond the Milky Way. CTHULHU NAUTILUS is equally at home in the murky depths of Earth’s Great Oceans and the caves and caverns of the Hollow World, below. Now, he joins the Outer Space Men in their quest to save the Cosmos from the carnivorous onslaught of "VORACIOUS," the ever ravenous Black Hole.[2] 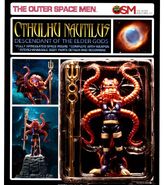 Cthulhu Nautilus: Descendant of the Elder Gods
Add a photo to this gallery 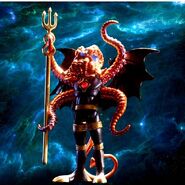 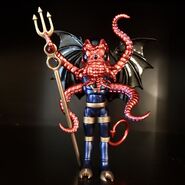 Cthulhu Nautilus Rlyehzoth
Add a photo to this gallery 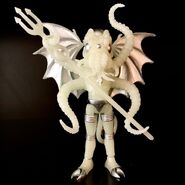 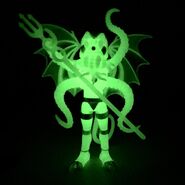 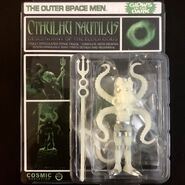 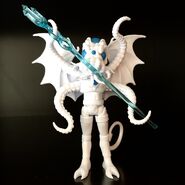 Retrieved from "https://glyos.fandom.com/wiki/Cthulhu_Nautilus?oldid=27530"
Community content is available under CC-BY-SA unless otherwise noted.