"The Ecroyex Initiative centers around some questionable ideals..."[1] "specializing in Renegade Gendrone pacification."[2]

The Knight of Darkness used his abilities to step between the bonds of reality to cross the dimensional barriers in his search. His second stop was inside the fortress of the sinister ECROYEX INITIATIVE, home of powerful cyborg beings bent on universal destruction. A crack team of Darkness Shadow Troopers and the Knight himself slew the Ecroyex warriors, discovering a great prize among their war machines: a new type of mechanical warrior bristling with weaponry.

This new ENEMY for Maxx Zero concealed double cannons in his chest, complimented with powerful arm blasters and a devastating retro-blaster concealed in the rear of his head. Given more substantial programming than their predecessor Guardian robots, Enemy and his partner-in-evil ROBO FORCE’S SENTINEL THE PROTECTOR were given a special "Ultra Silver" laser-reflective armor coating and directives to bring back Maxx at any cost.[3] 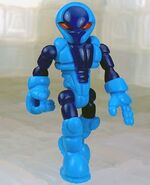 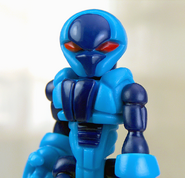 Retrieved from "https://glyos.fandom.com/wiki/Cynorico?oldid=17798"
Community content is available under CC-BY-SA unless otherwise noted.