Fast forward to nearly 4 years ago, around the time I started to develop new S.T.A.R. Team (Project X) concepts with Toyfinity's John Kent (who now held the licenses for some of my most beloved Ideal toy lines including S.T.A.R. Team) and our long time collaborator Ralph Niese. During those extensive work sessions, we discussed how we could bring back the Knight of Darkness and give him an army of armored soldiers. The old "trooper" concept then resurfaced from my youth, and things began to fall into focus for the Knight's resurrection."[3]

Production Darkness Soldier - Standard edition. Red with White Accents. The dangerous followers of the KNIGHT OF DARKNESS! Based on the classic KNIGHT OF DARKNESS from Ideal Toys! Includes bonus Glyan head! 34 pieces. Released on June 24th, 2016. $14 each.

Production Darkness Soldier - Legion edition. White with Black Accents. The dangerous elite followers of the KNIGHT OF DARKNESS! Based on the classic KNIGHT OF DARKNESS from Ideal Toys! Includes bonus Glyan head! 34 pieces. Released on September 25th, 2016. $14 each.

Darkness Soldier Legion
Add a photo to this gallery 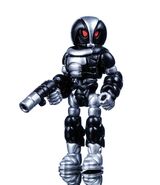 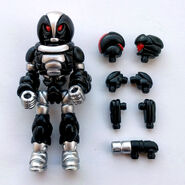 Complete kit
Add a photo to this gallery

Production Darkness Soldier - Destroyer edition. Classic Deep Blue (Zerak) with Black Accents. SPECIAL CROSSOVER EDITION with Onell Design. With the special Destroyer Alloy from a mysterious space station, the Darkness Soldiers are stronger than ever! 34 pieces. Released on May 13th, 2018. $14 each. 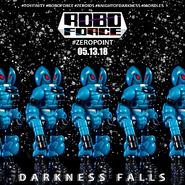 Zero Point advertisement (2018)
Add a photo to this gallery

Darkness Soldier Solar Storm
Add a photo to this gallery 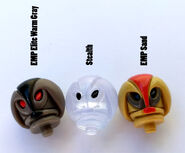 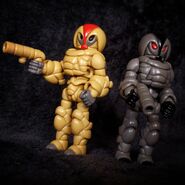 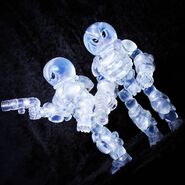 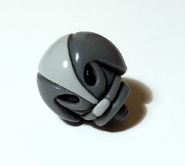 Retrieved from "https://glyos.fandom.com/wiki/Darkness_Soldier?oldid=31001"
Community content is available under CC-BY-SA unless otherwise noted.