"That's another "Hidden Mode" character up there in the pic, one that we call Exile Deniken. More on that little guy a bit later (it's based on a lost character from the old days)."[1] The first Deniken can be constructed using Standard Noboto and Standard Protoclone body parts along with the Protoclone's special gray head all included in The Andromeda Effect (Wave 49).

"Way back in 1994, while I was deep into reading Erich von Daniken's Chariots of the Gods[2] for about the 20th time, I started working on one of my own stories called "Union", which pulled many themes from his ancient astronaut hypothesis and combined them with just about every conspiracy theory imaginable found in the various magazines (remember those?) I was reading at the time. Having The X-Files on television also proved a massive influence on the subject matter.

The central idea of Union revolved around a secret war between 3 alien factions, and their collective ties to the development of mankind throughout history. Everything from Area 51, ancient civilizations, cryptozoology, bionic soldiers and a colony of enslaved hybrid manhunters imprisoned within a massive space station on the edge of an artificial black hole made it into the mix (I was just as bananas back then).

Throughout my college years I worked on different elements of the story, creating various illustrations (a couple are shown in this post) and bursts of text in the margins of my school notes. Eventually other stories moved into focus, but a few aesthetic ideas from Union survived and were reborn, showing up in Rechlen and Aves and beyond. Since I was fond of the leather armored "Warrior Grays" from Union, I decided to have any classic looking Gray alien type that might show up in the Glyos System resemble those old designs a bit.

Eventually I ended up sculpting the oddball alien in the pics above, a character that was based on the old Union designs. The body is a series of twist ties, with plumber's compound built over them. Kind of a mini vintage OSM construction with some pretty rough sculpting. This little guy was given to Michelle for Christmas around 2002-2003 (I built my first sculpted-over twist tie guy in early 1999).

The recent secret mode Exile Deniken from our last release pays homage to the Warrior Grays from the original Union story, as well as the original twist tie "Deniken" that's shown above.

Be on the lookout for some other color variations of the Noboto mold that take the core design for a similar "alien" spin."[3] 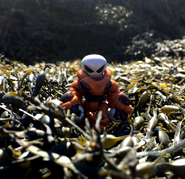 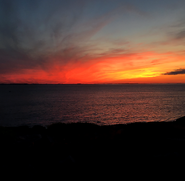 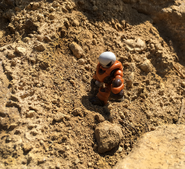 A Distant Call
Add a photo to this gallery

Exile Deniken hid behind a chunk of asteroid observing from a safe distance. The clandestine event had not gone unnoticed. "After all this time..." he said to himself, "...I've finally returned 'home'..." The Marezioc squad departed from the comet, something large in tow. "...to put an end to this madness!" Deniken finished. Quickly the guard and their prized relic were safely aboard the Edgeliner Marezioc in the bay. As the order to prepare for warp was given, Deniken saw his chance. In a bolt of red energy, he streaked towards the Marezioc hoping to reach it in time. In a brilliant flash of light, the ship went into warp.

This so-called "Vector Effect" seems to have no noticeable influence over either Travelers or Sincroids."[4] 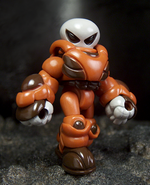 Noboto Exile Deniken
Add a photo to this gallery 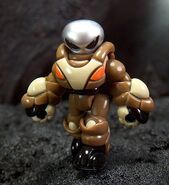 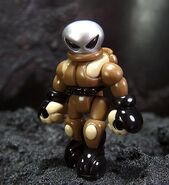 Outpost Odesskar Noboto
Add a photo to this gallery

Retrieved from "https://glyos.fandom.com/wiki/Deniken?oldid=25167"
Community content is available under CC-BY-SA unless otherwise noted.