"We are thrilled to debut our new game, Dungeon Traveler!

This flash game is part of a new series we've been chipping away at for a while now, but it was October Toys' Skeleton Warriors project that really fueled the fire. The Glyventure series will travel across all parts of the Glyos System and beyond, and it seemed strangely appropriate to kick things off in a living space dungeon!

Matt and I almost never stop pulling inspiration from our pasts. Bits of Zelda, Pac Man, and Golden Axe certainly went into the mix this time, along with some new elements. Getting my brother JBo involved was great - we've been making music together our whole lives, but never created and scored an entire game like this. It's a trip to hear his distinct melodies while playing around with these characters. Arcade Rats have a lot more in store, so we hope you dig the new vibes.

Thanks again to all of you guys, the amazing community that keeps Glyos thriving! Special thanks also go out to George and Ayleen Gaspar for letting us rattle their bones!

Ok, 'nuff yak... GO HACK. After completing the Story Mode, try The Duel, a never ending arcade mode that we'll be expanding upon in the near future. Post your high scores here! Who should we unlock next?"[2]

Emerging from eternal darkness, the Black Citadel Dreadvalken drifts between shadow and reality, calling to those driven by fear and desire. No soul that passes through its gates shall ever return the same...

As the Dungeon Traveler, you must arrow your Skeleden through each dungeon of increasing difficulty defeating the Titan Skeletons along the way. By grabbing the Soultaker Ax, you can temporarily whirlwind your way through the Skeleton enemies to defeat them. A cleared dungeon will allow you to reach the next level. If a Skeleton touches you, you lose one Soul (life) until you reach zero. Occasionally a Mordireus Skeleden will appear offering you an extra Soul if you reach it before it vanishes. After ten dungeons, you have reached the end of your journey.

Another Traveler has conquered the fear within and the Black Citadel once again fades into the void. ...waiting for you.

Making Of artwork reveals that Gearius was intended to be a playable character before Crayballim was added.

In order of appearance 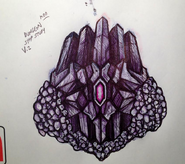 Pixel Titan Skeleton and Pheyden
Add a photo to this gallery

Retrieved from "https://glyos.fandom.com/wiki/Dungeon_Traveler?oldid=19910"
Community content is available under CC-BY-SA unless otherwise noted.