"Sometimes I forget that the parts of Pheyden and Exellis can be swapped. This strange looking amalgamation is the mash up of a bunch of black prototypes I had made earlier this year. The other guy is Eclipse Version Pheyden, and he is the mash up of a Reverse Exellis chest and pelvis, a Standard Exellis set of upper arms and upper legs and the head, feet, and hands of the super rare Black Pheyden(only 10 produced). His eyes are painted in a special way that make him look tougher and more sinister. Maybe he's Pheyden's angry older cousin -we all have one after all."[1]

Eclipse Pheyden
Add a photo to this gallery 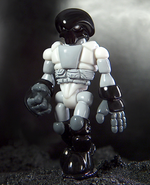 Pheyden Eclipse Mk. II
Add a photo to this gallery

Retrieved from "https://glyos.fandom.com/wiki/Eclipse_Pheyden?oldid=25168"
Community content is available under CC-BY-SA unless otherwise noted.