"In our journey back across the expanses of Monkaa to the Shadow Realm and Castle Umbreus, we further evolved. Some of the squad started taking on unique forms and adapting new abilities as well as being able to better control our shape-shifting and forging traits. The first of us to do so was my brother, Ehmber. He'd given himself that name, so proud to finally even understand what a name was. He chose to emulate the armor and helm of Palidar. “That all may be our enemy,” he would say. “But that all was the most formidable foe we will ever face on the battle field. I honor his skill by wearing this helm.” The others soon followed Ehmber’s example. They soon gave themselves names. Burhn, Boihl, Blahst, and Blahze. Followed by Mag-Nahr and Mag-Lahr, the molten twins. Then came Cyndehr, who to the surprise of the squad took the form and beauty of a fierce warrior maiden. After that Inferneus, Volcaneus, and Scaldeus. Finally the largest of us, Flame Beard who sprouted an uncontrollable plume of searing fire on the entire lower half of his face. I was the only one of us yet to choose a name. Ehmber assured me that my name would come to me when the time was right.

Many months passed. So curious we became about our world and in honing our new individuality that we had all but forgotten we set out to return to the Pit. We travelled across the entire northern hemisphere of Monkaa. Battling Gearo, and occasionally Vilhain, depending on the encounter and the balance of power. The whispers on the wind had reached us that our small band of warriors were being called the Lava Strike Force by the common folk and the survivors of our battles. We had become an impressive and deadly faction all our own. From some we were met with honor, reverence, given shelter and sustenance when we needed. From others we were feared and shunned, entire villages emptying like spirit vaults when we rode through.

We were a force like none other on Monkaa. Not quite Vilhain, no longer Gohlem, and certainly nothing like the Gearo we had met along the way. We came to odds many more times with the Vilhain and the injustices we witnessed perpetrated against the denizens of Monkaa from them than we ever did with the Gearo. Injustices that as we drew closer to the Vilhain keep we could no longer turn blind eyes to. We would indeed return to Castle Umbreus, but we would not be welcomed. We would arrive at our destination much more than the Pit, much more than the hive that spawned us. We were veterans, a strike force of elite warriors. Instead of returning to the Pit to be reclaimed by it we would return to liberate the rest of our kind. We thirteen would return to defeat the Vilhain hordes and give those of the Pit the same freedom and abilities we had finally come to realize were our rightful place in the Great Gear.

We stormed the gates of the Castle in the mid hours of the resting. We had thought that would be to our advantage. We were so very wrong. Along the road, a raiding party of one hundred or even an encampment of one thousand proved to be no match for the thirteen of us. Castle Umbreus and the bowels of the great mountain it is carved into the side of held over thirty thousand Vilhain soldiers. Venom, Umbrean, Ruby, Granite, even the lowly Obsidian and our own kin the Magma Gohlem were called forth to do battle against us as we struggled to advance through the castle to reach the Pit. We fought hard, we fought strong, and we fought as one. There would be songs of this battle if we grasped victory. There would be…. If."[1] 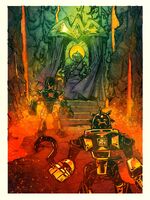 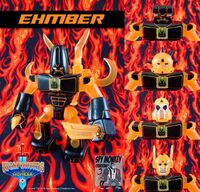