"These insectoid configurations resemble a species from the Glyos System called the Eidrallim. Upon maturity, these bug type soldiers bathe in an ancient underground lake filled with a metallic liquid that permanently coats their bodies. This process gives them protection from the harsh surface of their home world, the planet Eidrallis. Eidrallis holds a strange connection with the quarantined planet Issaris."[1]

Eidrallim Crawler
Add a photo to this gallery

"Owing to his ability to travel through the Edge of Space and phase throughout time, Pheyden has actually split into many versions of himself. He exists simultaneously in many different realities and sometimes even works with these alternate versions of himself if the need should arise. Each Pheyden has his own personality, but still follows the code of keeping infinity in order. Scar Pheyden was called to Eidrallis to assist the first Pheyden in containing a viral outbreak that was driving the Eidrallim to destroy one another. Having phased from a reality that was harsh and chaotic, Scar Pheyden was a natural choice for dealing with the suddenly violent climate of planet Eidrallis. Mounting a Claw Crawler, he readies for an inevitable clash with the normally peaceful Eidrallim."[2] 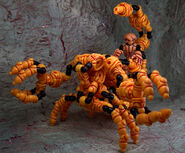 Scar Pheyden
Add a photo to this gallery

"So I have officially gone bug crazy. The more I build the deeper the hole gets. So, I don't even know how many Exellis Hyper figures gave their lives for this "Scout Pod" but I'm guessing about 35. The front hatch opens to reveal a clear green Eidrallim pilot. The pod wings can be folded out and swiveled around. Another huge pile of joints so by default the thing moves like crazy but stays nice and tight. Many different configurations can be created if you get bored. Pheyden can fit in it as well and the hatch comes down and hooks in place on the nose of the pod. It feels very solid and really looks like a giant bee fighter in the round. Finalized the standard Eidrallim worker as well. These guys don't have the powerful double arms of the soldier class but can move quick and last longer at work."[3] 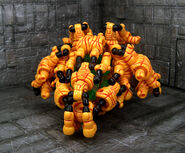 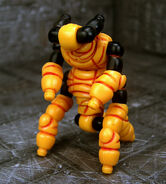 Eidrallim
Add a photo to this gallery

"Scar Pheyden returns to challenge one of the powerful Armored Eidrallim. Coated in a Bio-Alloy, the Armored Eidrallim represent the highest level of their strange species. When an Eidrallim Soldier has achieved many victories and completed numerous galactic travels, a new level of conscience is realized. These enlightened warriors are then subject to a process that coats every part of their bodies with an ancient Bio-Alloy.These Eidrallim emerge permanently armored and masters of combat. Scar Pheyden learns just how easily one Armored Eidrallim can claim victory, even over him. Maybe he needs some backup..." 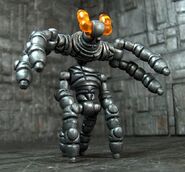 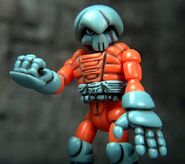 Eidrallim Crawler
Add a photo to this gallery

Eidrallim Claw Crawler
Add a photo to this gallery

Eidrallim Soldiers
Add a photo to this gallery

Retrieved from "https://glyos.fandom.com/wiki/Eidrallim?oldid=13879"
Community content is available under CC-BY-SA unless otherwise noted.