"Enemy is the most vicious and ambitious of the evil robots who are the mortal enemies of the Robo Force. Orders say to hold position? ENEMY attacks. Orders say to destroy a city? ENEMY destroys the whole planet. And so on. He is admirably equipped for his work: his chest compartment conceals twin laser weapons. And his pride and joy is the horrifying retro-fire attack gun mounted on his back; he can atomize an entire world without even looking back." From the original file card.[1]

"Working on the Robo Force relaunch ended up taking a bit longer than I had originally anticipated, with many weeks spent up at the shop working with the always amazing Ron Daley. By the time we finished the prototype I had taken around 500 pics of the process, attempting to catalog the various alternate builds that we tried to hide within the parts as well as the actual progress. John, Mike and Charlie over at Toyfinity were always encouraging and trusting and made for great partners in the development of their new Maxx Zero.

Once we finally got Maxx into production, John and I spent a lot of time talking about how to roll the new series out, and the best possible way to coordinate the releases with the story John wanted to tell. As we had been shooting ideas back and forth for the greater part of a year, the decision to have some shared colors across our respective lines seemed to make the most sense, for potential building as well as for crossover story purposes.

The recent blue hues from the Ecroyex wave were selected to pay homage to Takara's Giant Acroyear and Mecha Acroyear, two true classic toy designs from Japan. As strange as this may sound, as a child I would always dream of seeing characters from one series color swapped with characters from another series. Something about that idea still sticks with me to this day, so when the chance came up to possibly see Maxx sporting the colors of a Giant Acroyear, we had to go for it.

It's been a true privilege having the opportunity to work on bringing Maxx and the Robo Force back to life with the Toyfinity team, and I'm really looking forward to watching the line expand in 2014."[2]

Kit includes the standard 41 piece complement of Glyos compatible parts and an additional 12 pieces for MAXXimum customization possibilities! With over 50 paint applications in Ecroyex colors and one secret Glyaxia symbol. Origin Edition Enemy was released on December 20, 2013 along with Reforged Edition Hun-Dred.[3] 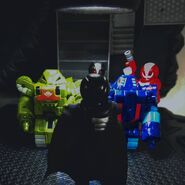 Enemy - Classic Edition
Add a photo to this gallery

"I've been having a lot of fun with these kits - here's an unlimited build of ENEMY using one Zeroid kit from this round, one Maxx Zeroid, and one Hun-Dred."[6] 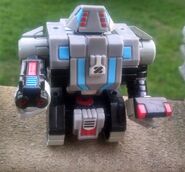 Retrieved from "https://glyos.fandom.com/wiki/Enemy?oldid=32680"
Community content is available under CC-BY-SA unless otherwise noted.