The Engineer Mimic could also have been referred to, by some, as a Reverse Venjorun due to its colors. In fact, it turned out that the red on this Engineer Mimic Armorvor was the "wrong color" as the intention was to make it match the Venjorun red. If you own these two Armorvors then you can do your own comparison. 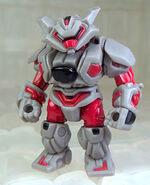 Retrieved from "https://glyos.fandom.com/wiki/Engineer_Mimic_Armorvor?oldid=30874"
Community content is available under CC-BY-SA unless otherwise noted.