Currently serving as an all purpose counterpart to the specialized VRD units and answering directly to Commander Awken, Cinar's development remains closely monitored."[3]

"As Glyaxia Command continued their search through Argen's data files, many strange records relating to the early development of the Buildman Project were uncovered. Within this information lay hidden a number of abandoned concepts that were taken directly from the Sendollest Buildstation archives by Argen himself.

Argen's data revealed that during the height of the Old War, the Metran Science Department discovered a derelict craft of unknown origin among the shattered moons of the Sendollest Drifts. Through the use of a powerful alien decryption mechanism the Metran Science Department pulled a series of esoteric mechanical plans from the craft's cortex and proceeded to try and recreate what they had found.

Documentation from the original Code Zereon experiments ended with an unexpected order to destroy all active test models and to halt any further development of the project indefinitely.

After learning of these events, Glyaxia Command realized that Argen was intent on resurrecting the Code Zereon project due to the evidence found inside his memory banks. It was then, through the use of Argen's own significant progress in nearly constructing a "Gendrone" Zereon, that Glyaxia Command was able to complete the unfinished work started by the Metran Science Department so long ago.

Within Point Cerrek, select Glyans learn how to operate the newly developed Glyarmor and Variable Reflex Drivers in controlled environments, all under direct Traveler supervision. These soldiers also take part in a specialized OTR virtual program in conjunction with intense mental and physical conditioning.

The Esedeth Mobile Patrol stands as the first division to incorporate both VRD tech and non-Traveler Glyarmor use."[5]

"One of the most widely used Variable Reflex Driver configurations on Planet Esedeth is the Trekrunner.

Based on Rig Runner mechanics, the Trekrunner is capable of moving at extremely high speeds and possesses low altitude flight capabilities.

EMP soldiers have been known to push the maximum limits of these fast moving and rugged Drivers, especially when facing the gravity defying "Quickships" commonly employed by the various relic hunters who feed on Esedeth's hidden treasures.

The Trekrunner form can be activated within any Variable Reflex Driver by connecting to a standard Glyan Blaster set in "data key" mode -as long as it contains the correct Trekrunner assembly code.

"Another VRD configuration that is put to heavy use on Planet Esedeth is the Guard Walker.

Operated by a single EMP soldier, the Guard Walker excels at traversing the ever shifting Orphormic Sands that cover so much of Esedeth. Some believe these strange sands actually possess a collective consciousness.

It is rumored that long ago the very surface of Esedeth swallowed the planet's first advanced civilization, leaving only scattered ruins as a warning to those who would dare trespass."[7] 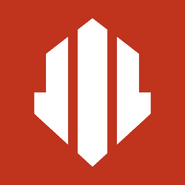 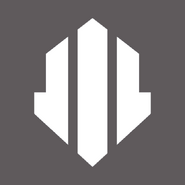 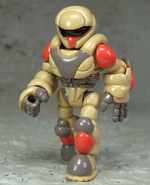 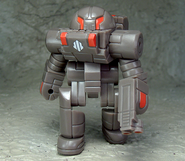 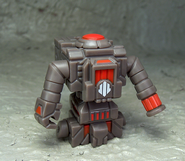 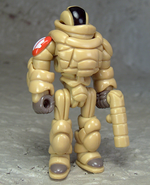 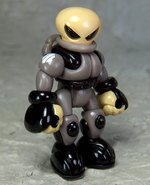 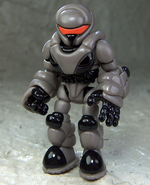 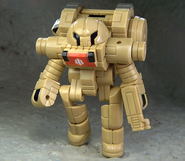 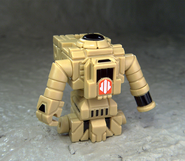 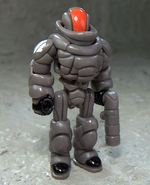