Handcast gray-and-white prototypes of Exellis were pictured on the Onell Design Blog during the Rechlen and Aves era.[1] With the official production version of the Lost Sincroid Army joining the line-up, a more mature and experienced Elder Exellis returned to lead the new LSA.

"The Lost Sincroid Army are the descendants of Prototype Sincroid Exellis who have dedicated their lives to finding their lost commander. With relentless tenacity, they search for Exellis, determined to complete their ultimate goal of ushering in a New Sincroid Age. Space Trappers Rechlen and Aves have narrowly escaped these hardened soldiers on many an occasion. The Lost Sincroid Army seem to have a particular interest in Aves."[3]

"Sarvo Halos created Prototype Sincroid Exellis along with countless other Mechanoid based lifeforms throughout the history of Glyos and holds many secrets about what is really going on."[4]

"The original Sincroids created by Sarvo Halos were awoken under mysterious circumstances on Metran, shortly after the end of the Old War. Very select elements from Sarvo's early archeological discoveries factored into each prototype Sincroid's design."[5]

"Rebelling against his tyrannical creators in the Glyos System, Prototype Sincroid Exellis battles for the freedom of his mechanical brethren as leader of the Lost Sincroid Revolution."[6]

Small Crawlers were sent out "to collect information and explore the Deep Ruins on Planet Reydurra itself."[8] They were to also function as personal guardians for when things got dangerous. The Reydurran Science Division discovered an Infection deep within the ruins which managed to spread to the Neo Aves Exellis. All three Council teams issued Combo Suits to the Glyans to contain the deadly virus from spreading beyond the planet. 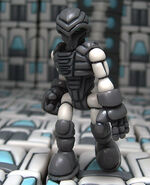 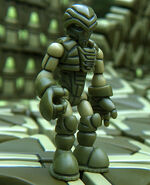 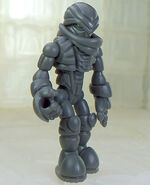 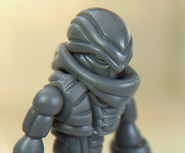 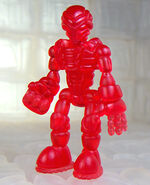 Scrapped figure during Wave 3. Pieces have made it out into collector hands.[9]

Scrapped figure during Wave 6. The chest/hands/feet of Core Phanost and the arms/legs of Standard Phanost. Very few orange Exellis heads made it into collector hands.[11]