The Search for Maxx Zero

"After a devastating loss to the Robo Force team, Maxx Zero abandons Zeton to grieve over his lost friend. Months later, ZEM has a vision of Maxx terrorizing a planet of bat creatures. Sentinel, ZEM, and Wrecker take to the Star Falke to planet Diavolus to investigate.

There they find Maxx has modified himself into a golden metallic warlord with little regard for biological life. There is also a new non-Zetonian robot with Maxx, the slithery Fangar the Conspirator.

Robo Force is faced with a horrible decision - do they join their commander in his new mission and forget liberating Zeton from Nazgar, or uphold his previous ideals and destroy him to save the native populace?

Also, what is the secret of the Forbidden Swamp? What is the strange glow that fills the water nightly? What could have pushed Maxx to enslave an entire planet?"[1]

Fangar the Conspirator, a vile serpentoid from the underbelly of the universe! Originally an unreleased figure in the 1980's Robo Force line-up, the Predanaut-class character was 3D printed and offered July 30th, 2015 in a limited run of 25 figures. Fangar features 22 points of articulation and is 3 1/8" (approx 8cm) tall. $24.99 each.[2]

Fangar next to Imperious Maxx 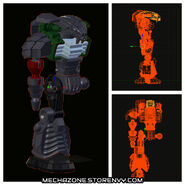 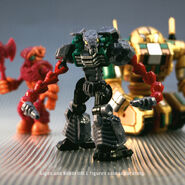 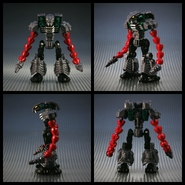 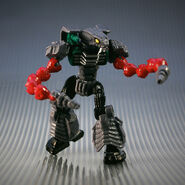