"NYCC EXCLUSIVE ALERT!! Next week Super7 will be back at New York Comic Con 2017 in Booth 126. Yes, we will have exclusives and debuts with us! Joining our previously announced NYCC exclusives is the diabolical 3.75" figure 2-pack of Horrid Falcon from The Worst and Fire Fight from Knights of the Slice! This 2-pack will be available in limited quantities."

Released online though the Knights of the Slice online store on October 30th, 2017. $25 each. Extremely limited stock. As these goods have been re-boxed, this stock may not arrive mint on card. 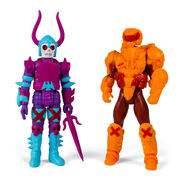 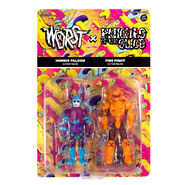 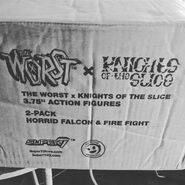 A case of figures
Add a photo to this gallery

Retrieved from "https://glyos.fandom.com/wiki/Fire_Fight?oldid=30714"
Community content is available under CC-BY-SA unless otherwise noted.