"The helper seeks to help others because he knows what it is to be helpless."

Fixer the Helper, unlike what is known about many Zetonians, is one or many machines wandering the surface of Zeton to repair and occasionally augment those in need. One such character was Cruel the Detonator who used Force Sync to merge his own body with a Weaponeer Warrior drone and Fixer the Helper to create an Ultimate form for the battlefield. 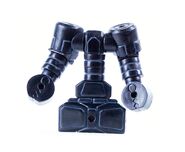 Add a photo to this gallery
Retrieved from "https://glyos.fandom.com/wiki/Fixer?oldid=17505"
Community content is available under CC-BY-SA unless otherwise noted.