Force Sync is a state of higher robotic consciousness achievable by Maxx Zero with any other member of the Robo Force, on a one-to-one basis, that allows him to tap into their higher functions from a remote distance. It's not easy to do and is rarely achieved.[1]

During a raid on Celestia, Maxx Zero is horrified to find that Battlestar has destroyed hundreds of Zetonians and reforged them into his city Guardians. While practicing Force Sync with Vanguard, Maxx Zero discovers a strange quirk in this reprocessed Zetonian matter - the dense Zetonian metal emblazoned with the logo of the long-forgotten STAR Team which each Guardian carries on his back calls to him. Maxx touches one of the Guardians, and it falls to pieces. The metal containing the symbol attaches to Maxx's chest, shifting pieces of his form to match the color of the metal.

With this newfound armor, Maxx truly is the invincible warrior of legend - but there is a catch. The armor of the STAR Team, working through whatever had been infused into the original metal, burns out in seventy seconds. Using this new knowledge, Maxx gains another advantage in his quest to take Zeton back from Nazgar and Hun-Dred.

Hammerforged: a Soldier and a Warrior

"Harvested by the Knight of Darkness to boost the power of NAZGAR's warriors!"

Stepping off the bonds of reality onto the world of Monkaa in another dimension, the Knight of Darkness soon discovered a new type of power to cultivate. Monkaarians, known to the rest of the universe more commonly as Weaponeers, offered unique power boosts which could be combined with Zetonian designs through a Force Sync to create more powerful Ultimate forms with Hammerforge Fists.

An army of Soldier and Warrior drones would soon march on Zeton soil, but it was Cruel and Brutal who would be the first to tap into the hidden Ultimate power within. The Weaponeer ability fused with the Zetonian form to unleash Cruel's true unnatural strength and power while Brutal gained true mastery over combat.

Vanguard's triple-power and Glyaxian origins have given him the ability to Force Sync with Maxx Zero to create Dreadnought Maxx Zero. So far the official configuration of the combined figures is unreleased.[2] 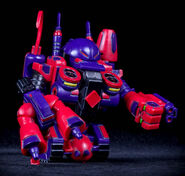 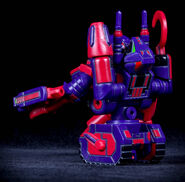 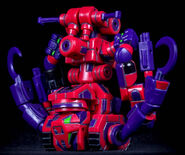 Retrieved from "https://glyos.fandom.com/wiki/Force_Sync?oldid=12413"
Community content is available under CC-BY-SA unless otherwise noted.