Galactic Emperor Mushi is an homage to the villain Frieza from Dragon Ball Z. It's colorway was designed by Kabuto Mushi fan Chris Para (aka JafariStew) 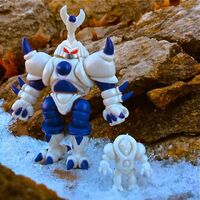 Retrieved from "https://glyos.fandom.com/wiki/Galactic_Emperor_Mushi?oldid=32408"
Community content is available under CC-BY-SA unless otherwise noted.