Glyos Wiki
Register
Don't have an account?
Sign In
Advertisement
in: Article stubs, Toy Pizza, Villains of the Slice

"Gamma Guy is a tragic character in the KOTS mythos, starting out as a villain and becoming a hero only to self-sacrifice to prevent the meltdown of Sub City (a research facility in the middle of the Atlantic.)"

"Gamma Guy is an "Old Hero" which is my classification for any character I designed as a kid that gets brought back to life as a modern toy. GG was always designed to be a big bruiser with radioactive powers, no doubt subconsciously inspired by the stories I was reading during Dale Keown's run on the Incredible Hulk. Gamma joined the Knights of the Slice toyline on Feb. 12th 2018, quickly selling out. He's been one of the more beloved character that fans were asking for a Vector Jump version of for a while. Gamma's next big splash came with a black and white ashcan comic featuring art by Gavin Mackie. The Sub City comic tells the tale of Gamma Guy's last days, sadly he'd never get to put on the Vector Jump armor that this figure depicts. I felt it was a fitting send off for the character to release a fan-requested version of him."

Former body-building mascot of the Nuked Cow hamburger chain (a competitor of Pizza Shunt), Gamma Guy ate too many of their experimental Bio Burgers and became poisoned with radiation sickness. One of the side effects causes his extremities to glow bright orange. Nuked Cow dismissed him and tried to bury the affair, leaving GG without a job, healthcare, or much time to live.

Hearing about the healing potential of the servo suits, Gamma applies for a job to be a Knight, only to be turned away due to his inability to pass the medical. This rejection starts a burning hatred for GG towards the order of the KOTS.

Thinking it’s his last chance at survival, GG starts planning to use his radioactive powers to break into the KOTS HQ and steal a servo suit for himself.

In what can only be suspect timing, a note appears beckoning him to Coney Island...

A competitor of Pizza Shunt called Nuked Cow, stole a Vector Jump armor set and attempted to harness the power of Gamma Guy. The experiment failed, leaving a highly unstable VJ suit that can't be worn. Place your KOTS in it at your own risk!

"New Paint Technique never done before Knight of the Slice!!" 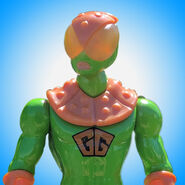 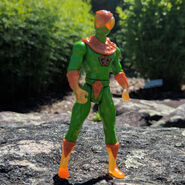 Childhood Drawing - A member of The Old Heroes

Production Knight. PVC Armor. Vector Jump Gamma Guy. 3 3/4" tall. Limited Edition. Action Figure of the Month Club Exclusive. 22 total parts. Figure released as the May 2019 Action Figure of the Month during the first week of May. Released online (public) on May 8th, 2019 via Lucky Draw Email Contest. $21 each. Released at Toy Pizza Con and online on July 13th, 2019. $30 each. 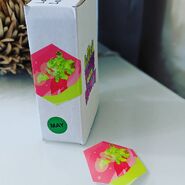 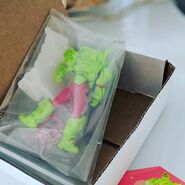 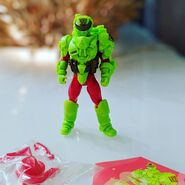 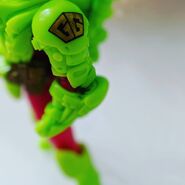 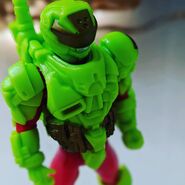 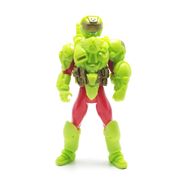 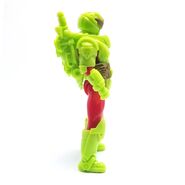 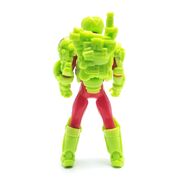 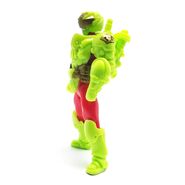 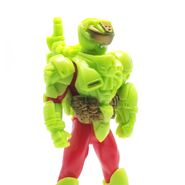