"During a recent attack on the fortress, the Saurians launched a daring assault, large enough that it drew forth the dreaded Gazer Beast from its halls. During the confusion I was able to slip unseen into the dark catacombs of the mountain fortress. The harrowing details of that adventure will be the source of a later entry. Needless to say, I was thrust into danger and narrowly made it out alive. However, what I found inside was well worth the risk. U was able to use a cypher that I had gathered on a previous mission (See Entry Log 0036154) to partially translate several transmissions sent from the fortress to an unknown source. The transmissions speak briefly of a tri-entity (translation undecipherable) that I have named the "Shadow Council". These beings are said to be ancient and posses intelligence far beyond that of the other creatures of this nightmare race, They have unearthed some instrument that had been lost for centuries, possibly a great weapon. I am unable at this time to decipher its true meaning. Lastly, the transmission ends with the ominous words... "Mesidrax the Destroyer'. Who or what this creature could be speaks to something terrible on the horizon." 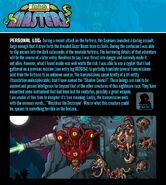 "In the high mountain pass lies a centuries-old fortress of immense power. Heavily fortified, it stands as a stark reminder of the evil that lies within its depths. Subjecting the Saurian inhabitants of this world, the Bio-Mass creatures continue towards their mysterious objectives.

There appear to be two distinct sub-species of the Bio-Mass Monsters. I have classified these as "Awakened" and "Unawakened". Although it appears that these creatures share a common unknown DNA ancestor, some contain advanced higher reasoning, their own language, and they are deceptively cunning and resourceful.

I have personally witnessed two unique, individual Bio-Mass sub-species on this planet.

The first creature I have named Gazer Beast. This creature belongs to the "Awakened" sub-species. It appears to be the ruler and master of this dark fortress, and as I have observed, a very formidable opponent. The Saurian inhabitants on this world will find it difficult to free themselves from its grasp.

The second creature I have named the Greater Contamination Beast. It is known for its corrosive secretions that reduce an enemy's hide, flesh, and armor to ruin in a matter of seconds. This creature seems to be of the "Unawakened" sub-species and does not seem to have the higher functions of its master. This creature possess the ability to spawn lesser variations of itself at an accelerated pace. Truly terrifying." 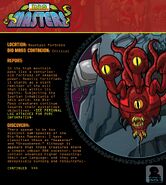 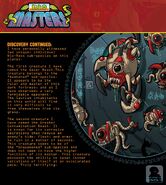 The Fortress of Terror

"In the dark Fortress things don't often go as planned... The Greater Contamination Beast and its Spawn creeping forth to attack their prey!"[1] 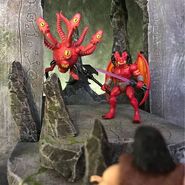 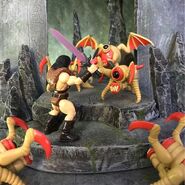 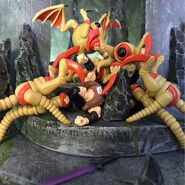 "In the dark fortress the creature silently waits for Its enemy's to draw closer. For centuries the dreaded Gazer Beast has amassed dark powers in his shadowy halls calling forth all manner of evil to his mountainous sanctum." 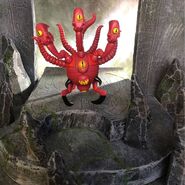 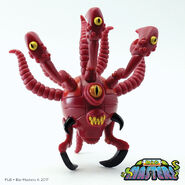 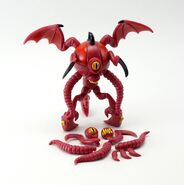 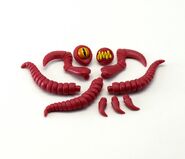 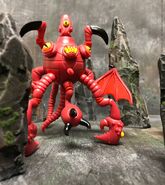 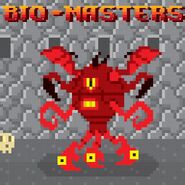 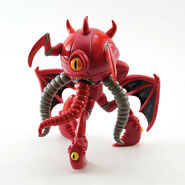