"Step forth," commanded Gearion as he forged a silver falcon sabre in his hand. "I would see the man I’m about to slay for stalking in the darkness."

"It is a time of great tribulation for Monkaa. In the nearly decimated once great Gearo Citadel the battle between Empyreus, Lord of the Gearo, and Umbreus, the Bloodlust Tyrant, reaches its climax. Across Monkaa rifts are opening and closing at a fevered pitch. The native Gohlem, many creatures, and very fabric of the planet are thrown in and out of these dimensional rips in the space-time, changing the face of the planet forever. All is silent at the foot of the Great Spire, the highest peak on Monkaa, in this calm before the storm. Suddenly and violently a rift opens above the mighty mountain and a halo of light emerges. Within the light an object becomes clear. A helmet. No, not a helmet…. a crown. The Crown of Light. The very crown worn by Empyreus. It hovers for a moment, still and seething with energy. In a streak of blinding pure light it is drawn like iron to a lodestone, rushing to the foot of the mountain.

Drawn to a modest unmarked pile of stones, to the grave of The Great Gearion, Lord of Light.

The crown strikes the burial mound like a comet, pausing for a brief moment, then is absorbed, almost hungrily, into the tomb below. There is an eerie silence that follows. A massive tremor begins to shake the earth, the ground pulses, the bedrock splits and the Crown of Light emerges, bursting forth within the grip of a mighty golden fist. A powerful armor clad figure rises on a beam of pure golden light from the very earth of Monkaa, bathed in a brilliant glow. He rides the beam slowly onto the ground and raises the crown high above his head. He closes his eyes and releases a scream of both anguish and joy so powerful that it shatters the rocks, stones, and ruins around the gravesite causing dozens of heartstones to be revealed. The golden figure strides forth across the landscape. Golden light pools in each footprint spreading like tendrils into the earth, seeking out the heartstones."[1]

The Lord of Light has arisen, but is Gearion the same Monkaarian ruler that Palidar and the world knew before?

Based on the Golden Age storyline.[2] 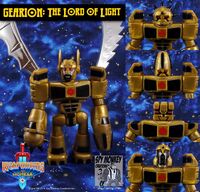 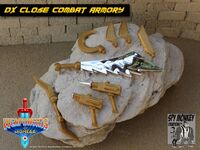 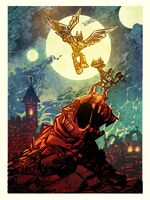