The Gendrone Rebellion Mimic could be classed as a modernized Venjorun. It isn't, but it could be. For only the second time, the wolf head was finished with the extra glossy black, like that of the Aurustell Elite. 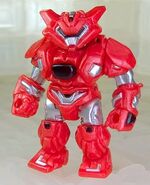 Retrieved from "https://glyos.fandom.com/wiki/Gendrone_Rebellion_Mimic_Armorvor?oldid=30889"
Community content is available under CC-BY-SA unless otherwise noted.