The year 2014 was welcomed in with a double Armorvor set - Ultra Corps Mimic and OMFG Mimic. The pearlescent silver shimmers when the light catches it, making the Armorvor look like it's about to teleport. 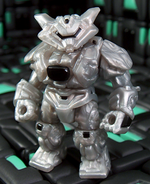 Retrieved from "https://glyos.fandom.com/wiki/Gendrone_Ultra_Corps_Mimic_Armorvor?oldid=30893"
Community content is available under CC-BY-SA unless otherwise noted.