One piece of Argen's Arc follows his journeys to various exotic and mysterious locations, as he searches for ways to adapt the forms and skills of different creatures into his core program, to share with his Gendrone brethren. Like a cosmic nature hike where Argen can transform into a mechanically based version of a select critter and experience how that entity truly lives, expanding his own spectrum of understanding.[1]

"Argen studied the creepy Claw Stalkers deep down in the dark caverns of the Planet Reydurra, adapting his structure in an effort to duplicate their incredible natural climbing abilities."[2]

"Lurks around the deep ruins of planet Reydurra. A distant relative of the Crayboth. Feed off psychic energy and move extremely fast, capable of scaling almost any surface."

"Known for their hyper powerful leaping abilities, the Jump Hunters of Planet Volkria proved a deceptively difficult species for Argen to try and learn from."[3]

"Powerful leaping ability. Hunt prey in groups of four. Communicate through a series of high pitched shrieking sounds that can also temporarily paralyze their quarry."

"With a vicious strike that is widely known across the System as one of the deadliest, the Granthan Rock Stinger seemed surprisingly at peace with Argen's presence, much to the relief of the curious Gendrone."[4]

"Solitary hunters. Can collapse into a flattened form to move under objects with ease. Lightning fast striking ability."

"Argen's connection to the Planet Rilleco runs very deep, and quite often he finds himself returning to the dark and mountainous world in search of solace. Watching the indigenous lifeforms simply cycle through their patterns brings Argen a great sense of peace in an otherwise trying time."[5]

"Exists in the shadows and caves of Rilleco. Can store energy gathered from lightning storms. Uses a unique bio laser for breaking through rock while searching for various prey." 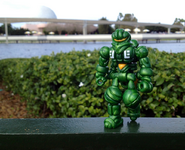 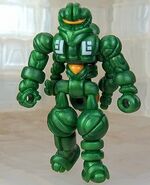