"It's a oddball line for sure, but it really embodied that classic old toy "funk" that made the 80's so memorable. It still does when I look at the range after all these years!

Many glaring swipes from more popular properties of the time peppered the "original" character designs, but somehow when they ran them through their own filter the would-be ripoffs took on their own cool identities.

Then here we are taking a crack at toy designs that were, in themselves, also tributes to other toy lines!

Hopefully you guys will find some interest in the strangeness of this round."[1]

"The Guardstar and Alienac base bodies have no paint except for the helmet visors, so in effect they are right in line with the current Buildstation options, just in two more basic colors."

"Each Guardstar DSG comes with both a clear w/painted accents Hub "head" like in the pic above, as well as a solid Hub head so you can have the option for a armored helmet look (which also serves as a secret homage to another lost line called Tente). Designers really seemed to love making yellow astronauts back then!"

"When you assemble the Hub Set with these new painted styles on the Hub heads, you end up with a kind of neat scrunchy droid version of the full figure. Almost chibi like!

"This is a much deeper yellow and a near perfect match to the Sarvostar Mystery figure from October 2017.

It's funny that the Britains space yellow and the Fisher Price AP space yellow are so close. It's almost as if it was planned."[2] 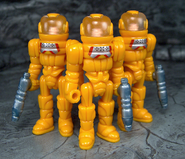 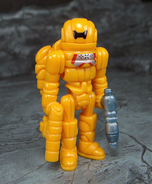 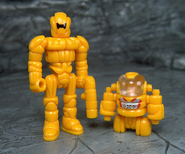