September 2012 saw a double Armorvor drop - Hades Mimic and Stealth, each selling out rapidly. Like the Venjorun before it, Hades was and still is one of the most desired Armorvors for a collector. It has to be something to do with the intimidating look of the all black armor, especially when the helmet is in place. 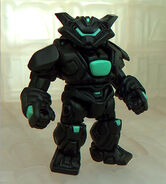 Hades Mimic Armorvor
Add a photo to this gallery

Retrieved from "https://glyos.fandom.com/wiki/Hades_Mimic_Armorvor?oldid=30848"
Community content is available under CC-BY-SA unless otherwise noted.