"Traveler Harcoriun operates as Tracker's partner when called upon, and stands as one of the original participants involved in the Glyaxia controlled Axis Evolution Program.

Throughout numerous missions, Harcoriun has exhibited an almost reckless willingness to push the limits of the Axis Tech, regardless of the risks. Despite this dangerous characteristic, Tracker trusts few as implicitly as Harcoriun."[1] 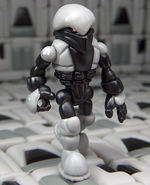 Traveler Harcoriun
Add a photo to this gallery

Retrieved from "https://glyos.fandom.com/wiki/Harcoriun?oldid=18071"
Community content is available under CC-BY-SA unless otherwise noted.