The Ivorinium, alongside the Ecroyex Mimic and Sidervor formed the second '3 set drop' of Armorvors since the production figures were released. The first '3 set drop' being Spectre, Neo Nebula and Verexxan back in October 2012 - a year to the month. Many collectors likened this color scheme (minus the light blue) to the good old Stormtrooper. Whatever floats your boat - there's no denying it's an awesome Armorvor! 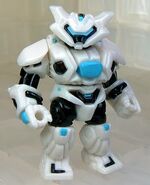 Retrieved from "https://glyos.fandom.com/wiki/Ivorinium_Mimic_Armorvor?oldid=30887"
Community content is available under CC-BY-SA unless otherwise noted.