"This illustration is from the Microshow project. The final version in the book came out a bit dark, so here it is lighter. Drew this in October '04. Both of these characters ended up appearing in Microshow."[1]

"During the making of the old Microshow booklet back in 2004, lots of Micro themed customs were born. Initially everything was kit bashed with additional sculpting done using plumber's compound, but as things progressed certain characters were completely sculpted, with Stikfas joints chopped and used for connection points.

The female, Microsoldier Kira, is an original design and so is Microdroid Ranic, a character who eventually made its way over into Glyos to become the foundation for Buildman."[2] 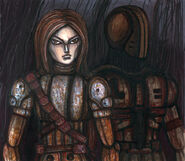 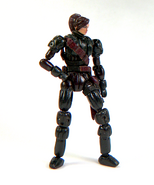 Kirallius Guard
Add a photo to this gallery

Retrieved from "https://glyos.fandom.com/wiki/Kira?oldid=32085"
Community content is available under CC-BY-SA unless otherwise noted.