It has been 100 years since the great cosmic robot hero, Galaxxor, was killed. Slain by the dreaded Lord Gorgax with a planet sized weapon known as The Ultimate Nullifier Cannon, the physical being of our robot hero was splintered into 999 shards, each flung to the far reaches of the pocket dimension known as The Alpha. Almost immediately, a giant neon green glowing shell formed around the home of The Seven Space Gods, the crystalline Alpha Primarus.

Over the past 100 years, Gorgax, his elite cadre of Cyborg Space Barbarian henchmen, and their Evil Mutant Legion has wreaked havoc upon the countless worlds of The Alpha. Some planets have held strong, but others have fallen to darkness and chaos.

But there is hope.

The neon shell that has surrounded Alpha Primarus has disappeared, and brilliant explosions of cosmic power are appearing at random places, throughout The Alpha. In places like the giant blue sun, Anubis 5, and the hive world known as "Dragon City", new Galaxxors are appearing.

When General Gorgax unlocked the cosmic powers of the Omega Matrix, Infiniton of the Seven Space Gods tasked Galaxxor 014 to take an elite team of Hippo Titan Soldier Deep Warp Gunners to the digital city C2-E215 to battle Gorgax and his Cyborg Space Barbarian minions. The fate of the Galaxxorverse hangs in the balance of this epic conflict!

Galaxxor 011 levitated just above the mirror-like surface of a giant disk floating in the blackness of space. Multi-colored bolts of cosmic energy crackled around him. Before Galaxxor, the towering projection of the Infiniton, one of The Seven Space Gods, loomed. It spoke-

There is a crisis in the Lazarus Sector, Galaxxor. Your brothers, 002 and 005, are currently locked in battles on two fronts. It is the plans of Lord Gorgax to bolster his forces there. As I speak, the Space Barbarian Skalldron has taken Gorgax's greatest ship, The Void, and filled it with soldiers from The Evil Mutant Legion. They are headed directly for The Lazarus Sector in hope of turning the tide of the conflict, and crushing your brothers. It is up to you, Galaxxor 011, to intercept The Void, and eliminate this threat.

The Void sliced through the swirling cosmic expanse of space. It was a massive longship built of a material so black, that it only registered as the total absence of light. In its control room, Skalldron gathered a group of 13 of his most elite warriors. Facing away from them, he looked upon a sprawling holoscreen. Amid clusters of arcane data readings, an image of Cerberus, a moon-sized pyramidal space fortress loomed. Skalldron turned to face his men, steam rising from the joints in his armor. From the empty blackness of his helm, an eerie yellow glow projected from his cybernetic eyes.

Prepare your troops, Generals. We reach The Lazarus Sector in four cycles! 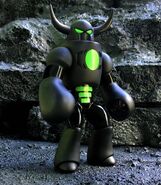 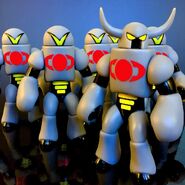 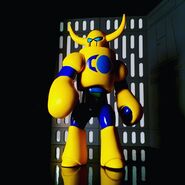 Azralok (Production)
Add a photo to this gallery

Retrieved from "https://glyos.fandom.com/wiki/Lord_Gorgax?oldid=14184"
Community content is available under CC-BY-SA unless otherwise noted.