"Check out those Mini Rigs and DSGs getting geared up near their camp, and that flying Hub Drone formation! I especially love the Travelers reviewing what looks like a holo-map. If only they knew what they were getting themselves into...."[1]

Arclurran slide down to the widening hole as the Deep Space Glyans continued to work. With one motion of his hand the rock flew away as the Sarvos approached. "Now move aside... I sense a powerful presence here." Arclurran commanded. Slipping through the new hole, Arclurran found himself standing on a firm green surface. It softly glowed in Neo Phase as he knelt to touch it. Reflecting back at him was their only mission here. "The Council was right... Your sacrifice has truly been great." Arclurran spoke to the Neo Phase Pheyden staring back at him froze in a shine of green tinted time.

"We finally found him..." thought Lorsailus as Arclurran telepathically relayed the news.

"Can you hold the defenses?" Arclurran replied as he debated what to do with the Pheyden trapped in front of him.

Lorsailus flew toward the charging purple Syclodoc of anger now before him. "Not for long, we're taking heavy damage." The eye beam of the Syclodoc fired with precision as Glyans were swatted down with ease by its energy. Glyaxia Command had been busy.

"WHERE IS THE TRAVELER?!!" the Syclodoc rumbled in a loud voice. A single punch from his massive fist knocked Lorsailus off his feet while another Glyan felt the brunt of the other swinging arm.

"Let no one pass -- I'm warping in!" ordered Arclurran to the excavation Glyans as he warped from the lower cavern to the heat of the battle. An overwhelmed Lorsailus was frantically trying to save a Glyan from the Syclodoc eye beam when the Sarvos appeared.

"YOU... WILL... GO... DOWN!!!" cried out Arclurran as he punched the massive purple monster into the rocky floor.

Meanwhile, back in the tunnel... a lone Glyan stands guard over the Neo Phase pool. However, the shadows are hiding something... something invisible... something... Stealth. "Commander?" the Glyan cautiously asked as he peered around the room. The invisible hand of fate clutched his helmet and squeezed with ease. "No..." said the voice. "Fragile creature.." the invisible voice noted as the camouflage drained away to reveal a beastly Armorvor Sonesidar mimic. The infiltration into Frontier Base Alpha had begun....[3] 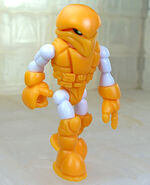