The Gohlem are elemental protoforms of Monkaa. Every citizen, soldier, warrior, forgemage, seer, every Weaponeer begins its life path as a Gohlem. Once their journey begins and their will starts to form each individual has a choice. Will they follow the path of The Gearo or The Vilhain.

The Magma Gohlem begin in the depths of the volcanic fire pits of Monkaa. As their life paths unfold most Magma Gohlem choose the path of forgesmith or warrior. Unfortunately many that walk the path of the warrior side with The Vilhain. 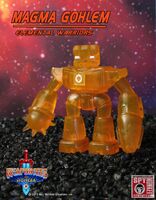 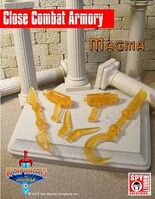 "Magma Gohlem is a standard Weaponeer figure includes a full set of bonus heads and sword and sickle accessories. Each figure includes 31 Glyos System Compatible Translucent Orange PVC parts. These are from our original run of 1st wave figures! They were held in order to coincide with the special Lava Strike Force mini-drop that eventually led to the creation of Fyreball & Ehmber. These are in VERY LIMITED QUANTITIES. $12.00 each." Released July 9th, 2014.[3] 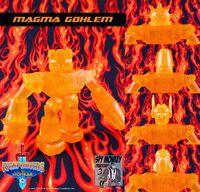 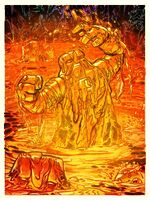 Retrieved from "https://glyos.fandom.com/wiki/Magma_Gohlem?oldid=17522"
Community content is available under CC-BY-SA unless otherwise noted.