Far below the surface of the dying planet Mars, the descendants of a once great race live on. Their once majestic cities have long since crumbled and the vast canals now lie buried beneath a sea of red sand. Their time and water are running out so Alpha 7 and the other members of the Martian armada travel the Galaxy in search of a suitable planet to make their new home. Frequent reconnaissance missions have landed on Earth and have given rise to what many earthlings consider wild stories of flying saucers and little green men. Martians are so cute and tiny! It’s obvious that they are friendly! Few of us would ever pause to wonder why their planet derives its name, from an ancient God of War.

Omnipotent Ruler of the Planet Mars. He leads the Martian multitudes through the awesome strength of "Brain Power" alone. Omnipresent and Ominous, his massive mind is able to transmit powerful waves of thought through the vast expanse of Outer Space. His "Brainwaves" can be received, and read, by the antennae on every Martian’s head. Thus, he commands the Martian Armada from a secret base, hidden beneath the Mysterious Face that remains the last visible surface trace of the once Great Race that, somehow, manages to survive and thrive, deep below the barren wastes of the dying Planet Mars.[1]

Beneath the silent rust-red surface of a once green planet, no longer hospitable to life, through adaptability and creative biology, the brave inhabitants of Mars survive. Traveling aboard their Flying Saucers, Men of Mars have gathered out of this world technology from every corner of the Cosmos. From Planet Earth, they have acquired a science known as “Bio-Tek”, equipping their military with living weaponry, derived from Earth’s Biology. Their naming system, too, is based on Earth-like Alphabets. Thus, every member of the Martian Armada, depending on his rank and station, has a name ranging from Alpha to Zed. From Alpha One, the Supreme Commander, to the most lowly Zed Eye Warrior, each has both a letter and a number for his name.[2] 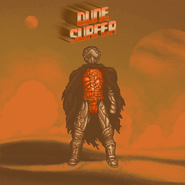 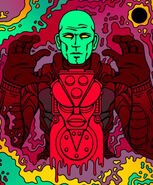 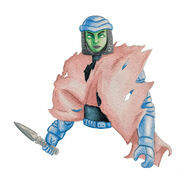 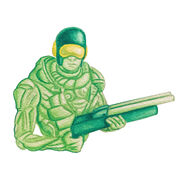 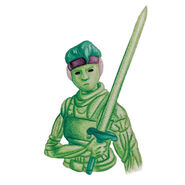 Martian Guardsmen
Add a photo to this gallery

Retrieved from "https://glyos.fandom.com/wiki/Martian?oldid=35484"
Community content is available under CC-BY-SA unless otherwise noted.